Last year I began assisting in the development of the AirBooster, a scale jet-powered vertical take-off and landing vehicle funded by FusionFlight. I expressed an interest in the rapid prototyping, design and construction of a functional vehicle utilizing my PX4 Development Kit for Simulink as a basis for the flight control system.

The project was hindered by a lack of funding and the discovery of many inherent flaws in the feasibility and design of the vehicle. This halted any further progress, and I consequently discontinued my voluntary efforts to assist with the project. As a result, I have chosen to document and publish my work on the project in light of the inaccurate content published as part of the FusionFlight JetQuad Kickstarter campaign. I do not agree with the false representation of my work in a campaign aimed to profit from the backing of an underdeveloped technology.

The AB1 is intended to be a scale prototype for a boost-to-orbit jet engine powered launch vehicle. The ultimate AirBooster design calls for the use of afterburning jet engines common to several American military fighter jets. The origins of this idea are nothing new. The basis for the Air Booster comes directly from a recent NASA patent (US8047472) for a reusable air-breathing Ram Booster. 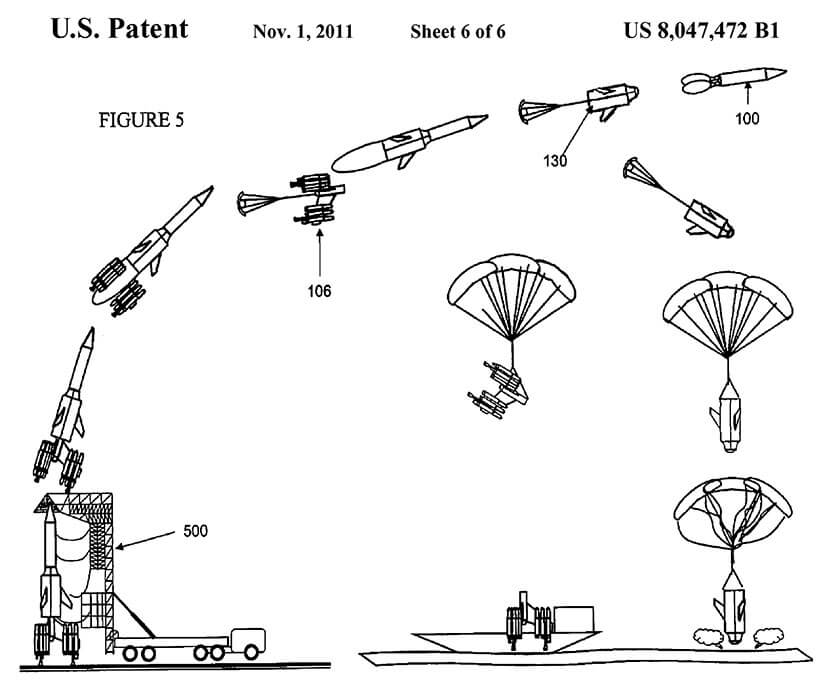 The initial motivation for such a launch system was the proposed cost savings accrued by the engine’s higher specific impulse, but this oversimplification is flawed in that is assumes a constant specific impulse from ignition at zero velocity up until the final stage separation at high speed. Consequently, these cost savings are negligible at best. However, there is a greater potential for cost savings associated with the reusability and low maintenance of a jet engine. This is precisely the motivation for NASA’s Ram Booster patent.

Designs for reusable rockets, such as the Falcon 9, and alternative launch methods, such as Orbital’s air-launched Pegasus rocket, are much further along in the development cycle and are likely to be far less expensive than the combined investment required to independently fund the design, production and certification of a full-scale jet engine powered launch vehicle. Unlike a conventional rocket where the thrust must be great enough to accelerate the entire mass of the rocket to space, a supporting boost aircraft needs only generate enough thrust equal and opposite to the drag induced upon the vehicle at a velocity necessary to lift the mass of the vehicle. In essence, using an aircraft to boost launch vehicles benefits from the work generated through lift without the need to carry with it the surplus of fuel required to sustain a vertical ground-launched rocket. 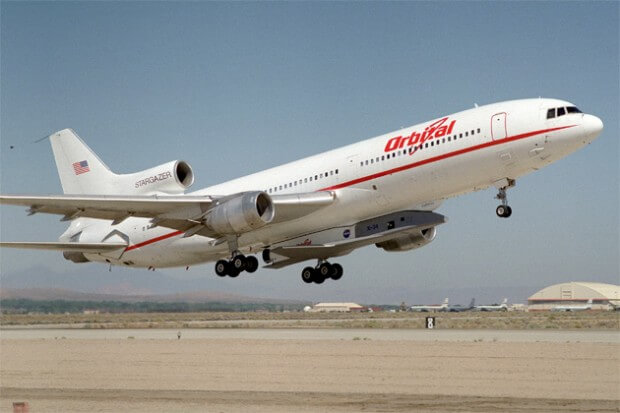 A potentially effective solution to the problems with using jet engines for space flight has been proposed by Reaction Engines Ltd, a private company in the United Kingdom developing the SABRE (Synergetic Air-Breathing Rocket Engine).

The original design for the scale AB1 was a vertical stack, much like a rocket with legs. A single jet engine at the base of the frame provided vertical thrust managed by an off-the-shelf engine control unit for model airplanes. The design lacked proper avionics, power and computer systems essential to its stability and control. Due to the “off-the-shelf” nature of the project, there were many black box components incorporated into the original design for which the operational characteristics and responses were unknown and often difficult to characterize. 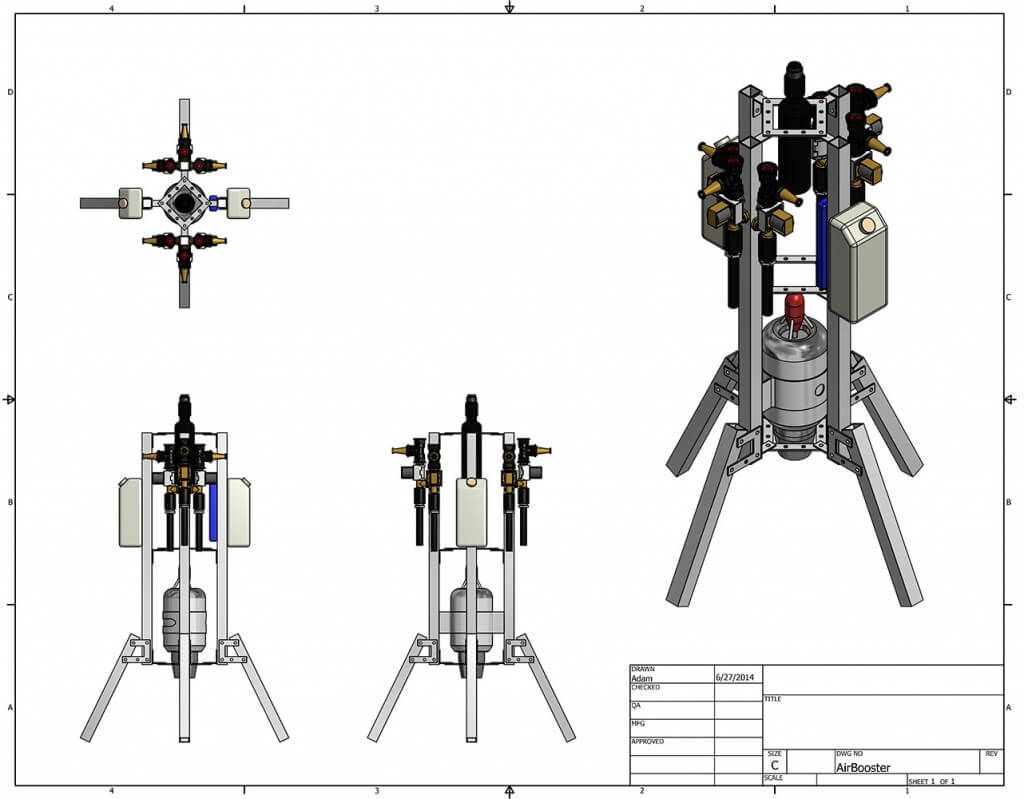 The initial mathematical models were incomplete, demonstrating it was feasible to maintain stability of the vehicle despite further analysis and tests eventually serving to disprove this. Using a single jet engine, the thrust was exhausted from the nozzle in a vortex. A proper fluid dynamic simulation of the engine would have clearly shown this, but it had been overlooked in the original concept. This vortex induced a significant torque about the vehicle with a magnitude greater than any other counter-torque acting on the body. Therefore, the system was entirely unstable and could not be controlled.

After a series of flight tests and improvements to the mathematical model based on observations from the tests, it was clear that the existing single-engine vehicle would require a complete redesign. Four possible solutions were considered to address these problems:

For a single-engine design, decreasing the thrust-to-weight ratio was not an option. This ruled out control surfaces and thrust vectoring. The only pneumatic solenoids capable of sustaining the necessary flow rate were much heavier and required a larger supply of air, thereby increasing the weight. Having considered the many design flaws of the original vehicle, the scale prototype of the AirBooster was repurposed towards the design of a miniature jet engine powered aircraft.

The new design for a four engine vehicle was similar in appearance to a quadcopter and named the JetQuad. A miniature jet-powered “drone-like” platform is unique in that it fills a void between small fixed-wing or rotorcraft vehicles and a rocket or cruise missile. Such a vehicle provides substantial acceleration and maneuverability with an adequate payload-bearing capacity in a very small form factor and has potentially far-reaching military applications. 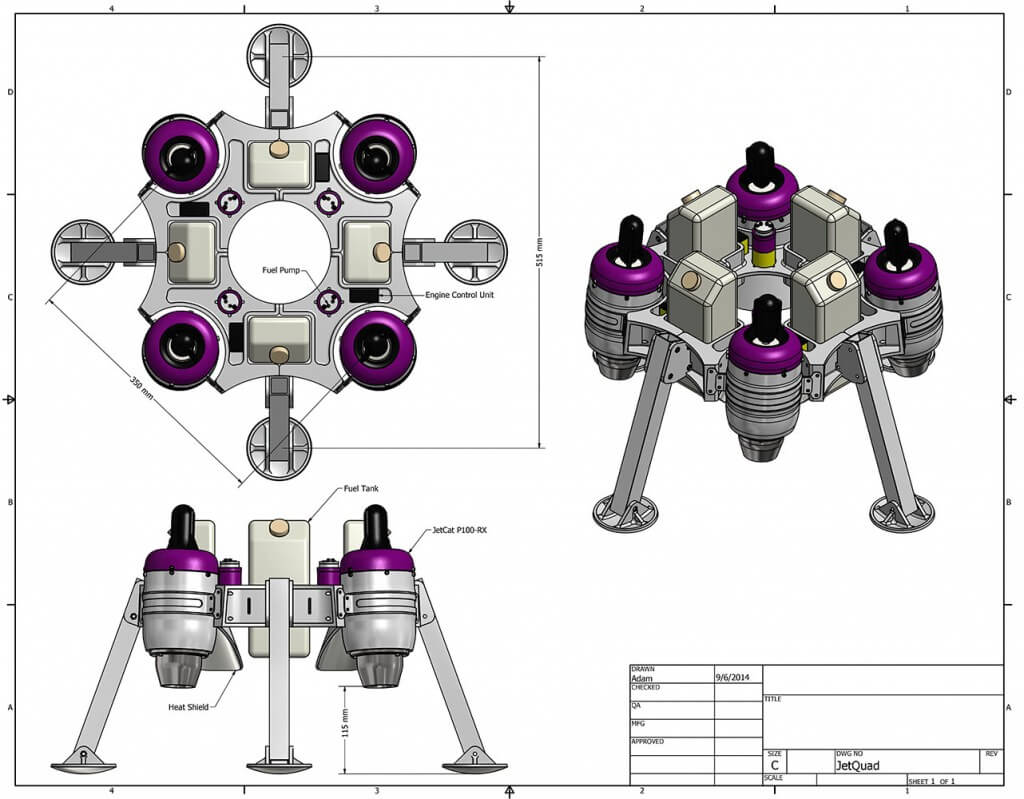 The JetQuad was intended to be a proof of concept vehicle for alternative military applications; however, the preliminary design still requires significant progress to become a reality. Not only would the vehicle require custom-made miniature counter-rotating turbines unavailable in today’s market, but a thrust vectoring system for each engine is absolutely essential for stability and control. Although these modifications to the design may be feasible, they would require an inordinate amount of time and money to independently develop a functional prototype. Without these modifications to the design of the vehicle, the vehicle is inherently unstable and cannot be controlled by pilot or computer control system. A miniature jet turbine simply does not offer adequate control authority to maneuver the aircraft in a controlled manner.

Going forward there are many steps that must be taken to first examine the stability and control of the JetQuad and later implement the proper guidance, navigation and control system required to pilot the vehicle. Using mostly off-the-shelf components, the vehicle itself requires the least attention. Few parts require assembly. However, preliminary models suggest that four jet engines are incapable of providing closed loop stability of an attitude feedback control system. Thrust vectoring control surfaces will allow for a much improved control response unobtainable with pneumatic thrusters. With the incorporation of these components into the vehicle, a complete model of the system must be redeveloped in order to design a viable feedback control system. The aggressive nature of maneuvering such a vehicle demands a precise inertial measurement unit coupled with a global or relative positioning system and advanced estimation algorithms. The feedback controller must then be designed to issue commands to all four engines as well as the eight servo mechanisms (two per engine) required for thrust vectoring. The JetCat ECU will eventually need to be replaced by an in-house design required to improve the control authority of the engine. This is necessary for precision control of the vehicle’s altitude and vertical velocity.

I am publishing these files to be used as a source of reference. I hope they will be useful to someone more qualified to pick up where I have left off. A fully functional prototype of the JetQuad is projected to be several years from completion. Aerospace guidance, navigation, control, modeling and simulation experience is essential.

JetQuad by Adam Polak is licensed under a Creative Commons Attribution-NonCommercial 4.0 International License.