After receiving my new Printrbot + from one of the original kickstarter backers, I promptly assembled the printer in hopes of having it printing as soon as possible. The printer went together quite smoothly and without any major issues. After reading of previous user’s experiences, I was a bit concerned how the quality of the printed parts and bearings would be. Fortunately, my kit arrived with no missing parts, in fact, there was plenty of extra hardware.

The quality of the printed parts that arrived with my kit were not the best, so after tuning in the printer and adjusting many settings in Slic3r, the first items I printed were some replacement parts. After weeks of use, three problems began to arise. The first was that I could not consistently produce prints that would stick to the build platform without curling at the edges. The second was that the tension of the belt along the X-axis began to warp the X-bridge, causing the Z-axis to slip along the right threaded rod. The third was the inability to level the plywood bed using the standard fixed mounts.

The first issue was quite easy to address. To correct the warping and inconsistent heating, I finally purchased an 8″x8″x1/8″ sheet of temperature resistant glass from McMaster-Carr. The first time I installed the glass I left the heated bed facing upwards with the silk screen printing on top. This didn’t produce enough heat to keep the prints on the glass, so I reversed the heated bed so that the bottom side faced upwards towards the glass. I also printed glass clips to secure the glass to the heated bed and keep it away from the exposed contacts at the rear of the circuit board. I would recommend printing the glass clips before going through the work of flipping the heated bed and securing the glass, otherwise you will need some way to temporarily hold the glass in place while the clips print. 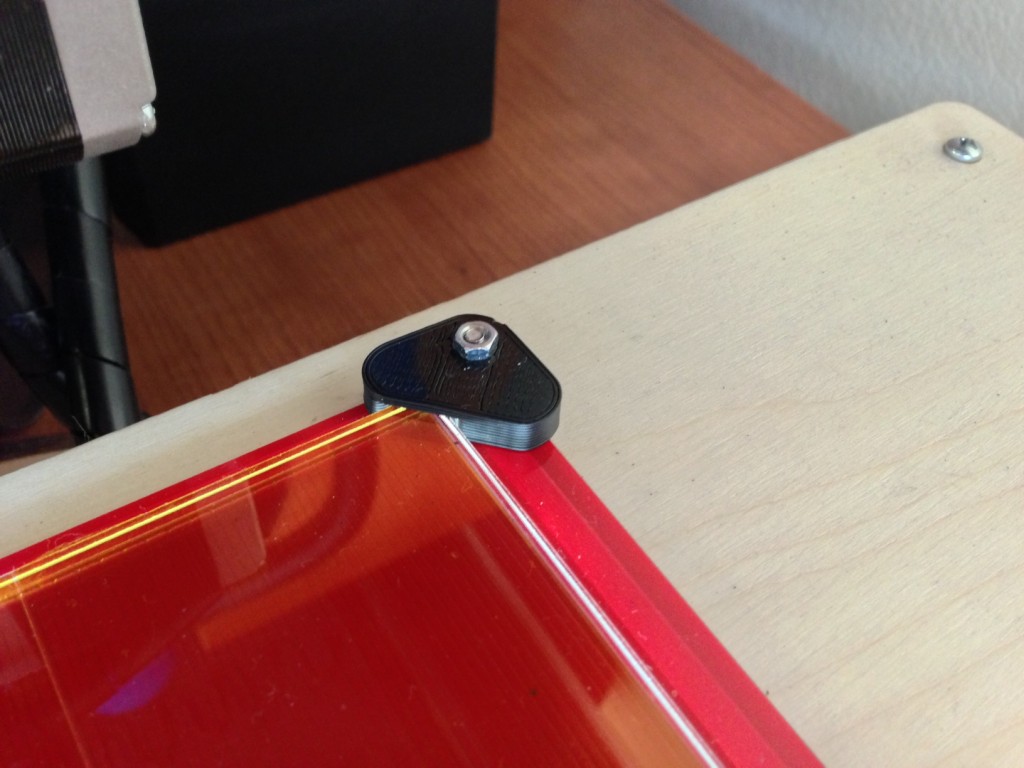 To correct the second problem that I was having with the laser cut X-bridge, I decided to completely redesign the bridge and extruder mount. This process took many revisions before I finally had a working setup, but once complete, the improvements were very noticeable. My new X-bridge design corrected several of the problems I encountered with the original laser cut design, including:

1) Z-axis smoothed and threaded rod spacing was incorrect, causing the threaded rod to spread away from the smoothed rod when the bridge was lowered. This caused binding and slipping along the Z-axis that was difficult to manage. With my design the spacing of the rods has been corrected.

2) Placement of the threaded rod nut was too low on the bridge and poorly secured. With only a nut on the bottom of the left and right sides of the bridge, the bridge was free to move upwards unless secured by two additional nuts at the top. However, adding two additional nuts at the top often caused binding of the Z-axis. With my design a single nut is secured within the bridge mounts along each side. The nut is secured on all sides, preventing it from slipping and eliminating binding.

3) The laser cut X-bridge of the original design was made to hold the stress from the belt tension instead of taking advantage of using the smoothed steal rods as structural supports. This led to warping along the plywood parts and eventually slipping along the Z-axis. With my design the bridge mounts are made to use the smoothed steel rods of the X-axis as the structural supports that take the load from the belt tension. This eliminates the need for any other cross beam at the rear of the X-bridge and strengthens the mounts. 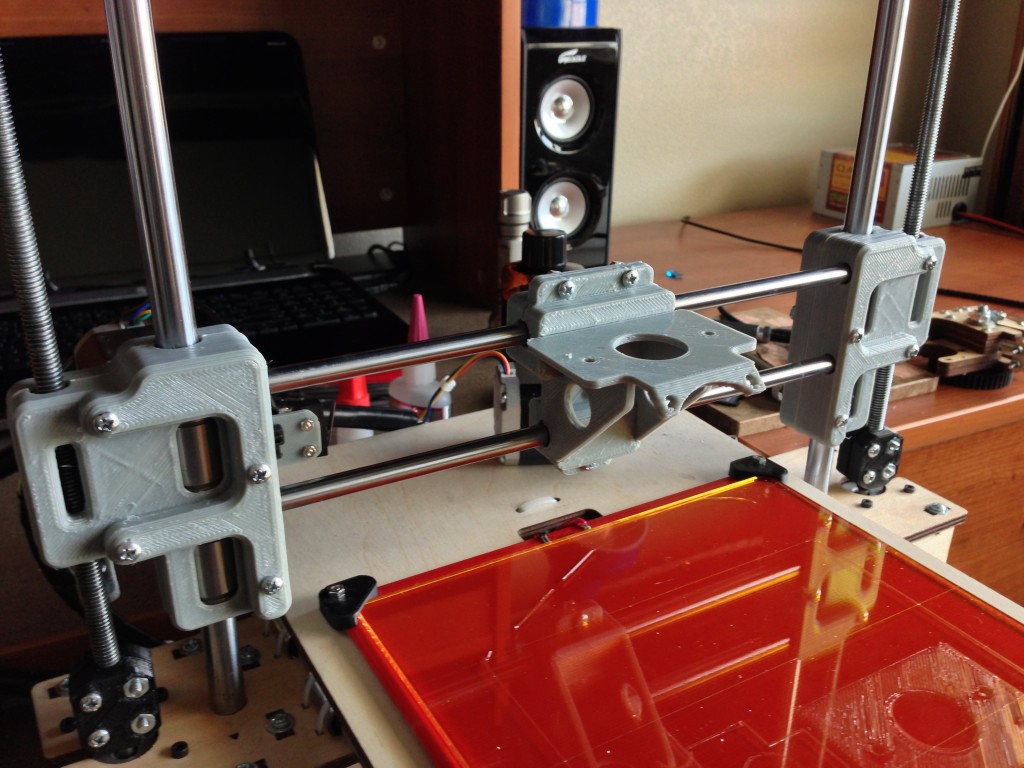 To correct my final problem, I redesigned the bed mounts so that I could adjust the height of each corner until the bed was level. These mounts use the same hardware as the original mounts with the exception of the spring. If you don’t have a spring, then you can put a nut on the top and bottom of the bed, but it will be more difficult to adjust. My kit came with two extra springs used to hold the extruder closed, so I cut each of these springs in half and used them on each of my bed mounts. 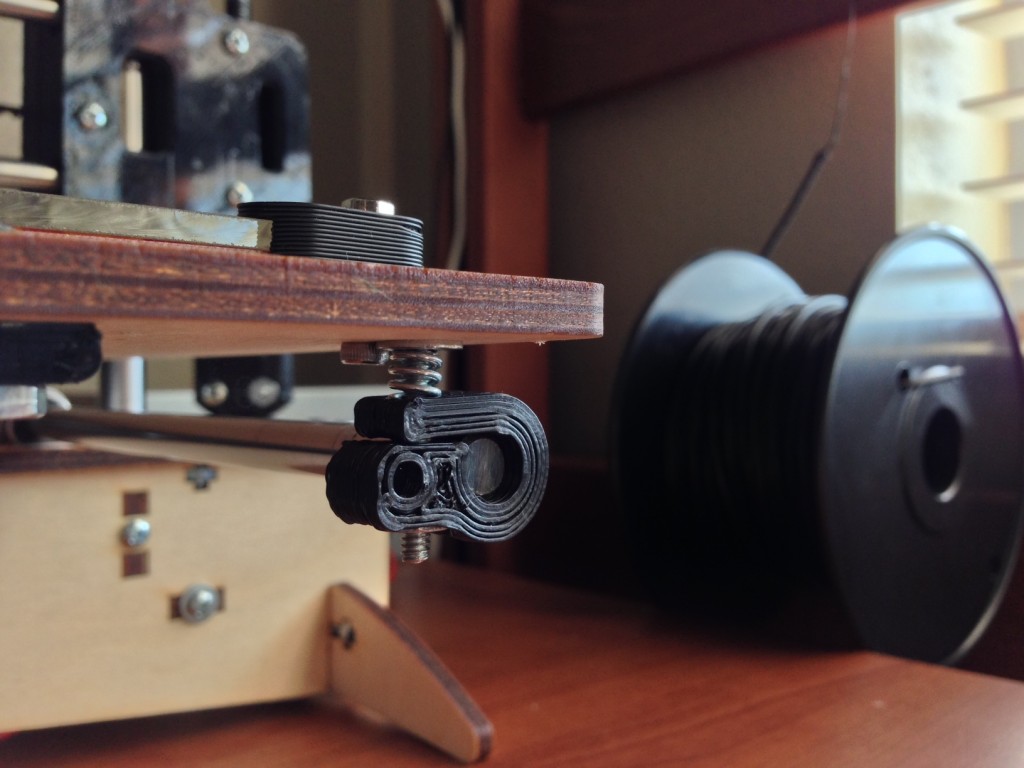 Although not entirely necessary, I made a final modification to my printer to improve the extruder mount. The mount has been redesigned to accept three linear bearings to prevent the wobble experienced with only two bearings. The extruder mount is very similar to the original mount, but it has an integrated 40mm fan attachment and a less bulky design. 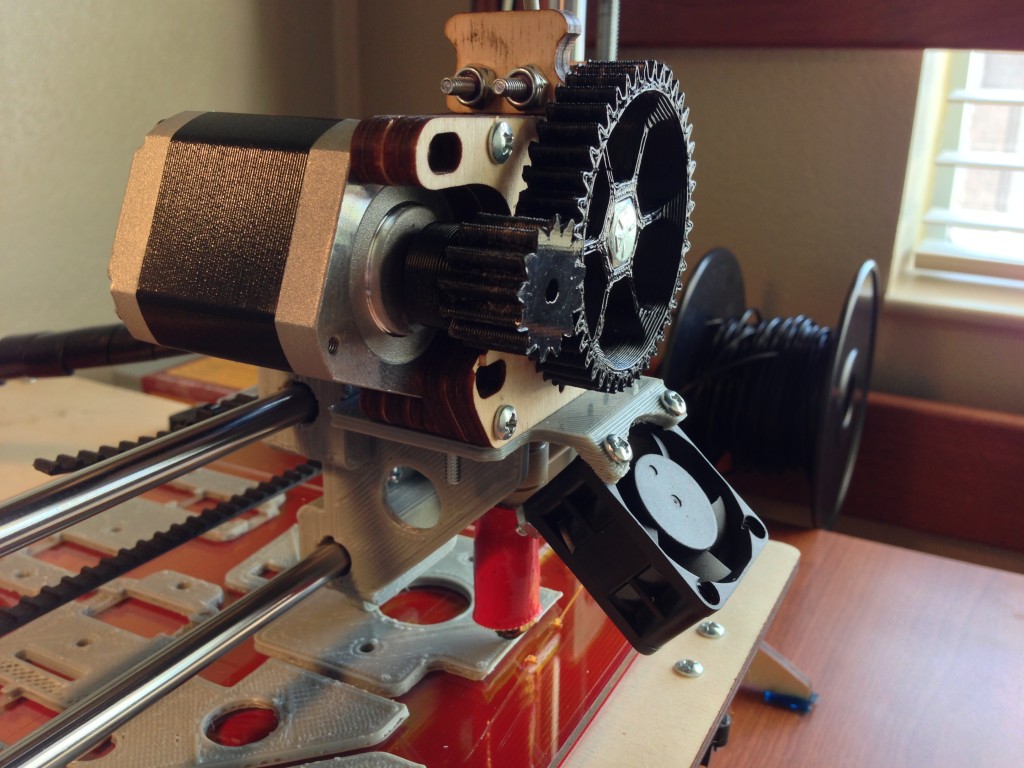 All of my parts can be downloaded from Thingiverse. I will also be selling these upgrades at my shop. You can find assembly instructions here.